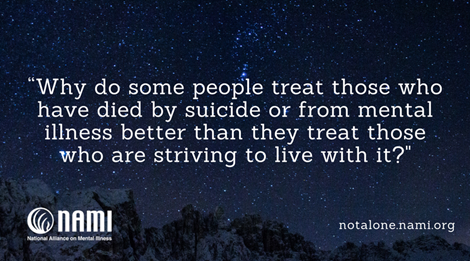 I can still hear my 4-year-old brother, John, singing, “Love is something if you give it away, you end up having more!” I can also still hear the phone nearly 25 years later. I was in the depths of depression, so I didn’t answer. It kept ringing.

I finally answered. “Melody? I’ve got some bad news…John… is… dead.”

I don’t recall exactly what was said after that. I just remember that my brother had died by suicide.

Given that I was struggling with suicidal ideation myself, there couldn’t have been a worse time to receive this news. A common theme among people contemplating suicide is the persistent, intrusive feeling that they are a burden to their loved ones. I know because I live with chronic physical and mental health conditions. It is exhausting for me, and it’s exhausting for those who know me.

However, I know that I am more than my illnesses, I am more than my suicidal thoughts: I am a musician and a writer. I am an advocate and a dedicated friend. Being in a relationship with me doesn’t mean that you must meet all my needs. It means that you should educate yourself about my conditions, acknowledge my struggles and appreciate my efforts.

After John’s death, I noticed that people had much more forgiveness and compassion for him in his death than he had experienced during the difficult periods of his life. Hundreds of people, including those who had abandoned him in his darkest times, attended John’s memorial service, which for some reason was called “A Celebration of Life.” I wondered, “Why do some people treat those who have died by suicide or from mental illness better than they treat those who are striving to live with it?”

John chose to take his life; I choose to live mine. I choose life even though there has not been a single day as far back as I can remember that I haven’t considered suicide at least once. However, I am determined to do all I can to continue to choose to live and to help others do the same.

Such was my motivation for founding TreasureLives in August of 2016. I believe that prevention of suicide is possible. TreasureLives is developing a mental wellness curriculum to teach the identification of emotions and boundaries, communication skills and “what-to-do-if’s.” We are dedicated not only to learning from lives lost, but to lifting up those who have themselves survived attempts and are now choosing to live.

At TreasureLives, we say, “It doesn’t take much to be a hero.” Meaning, if we all paid just a little more attention to each other, those of us living with mental illness wouldn’t feel as though we were burdens. To clarify, paying attention and being my hero doesn’t mean that you must do everything for me all the time. It means that you try to identify and communicate your boundaries because we can only have a healthy relationship if we are honest with each other.

On a practical level, it means that you find space for me somewhere in your life and demonstrate that you cherish that space. Show me that I am loved. In doing so, you will be celebrating my life with me now—not after I’m gone. That’s all it takes to be my hero, and I want nothing more than to be yours, too.