But I Was A Victim, Right?

But I Was A Victim, Right?

When you become physically ill, there is a good chance you’ll receive ‘get well’ cards, flowers or something indicating a caring community supporting you. When I became severely ill, there was little support. Other than some family and friends, barely anyone knew. It stayed quiet, shoved behind walls similar to those I was admitted into. Why? Because it was a mental illness. Instead of a caring community, I received shame especially during the worst of my schizoaffective disorder.

I was twenty-two years old and in my last semester of undergraduate college when I suffered two psychotic breaks. During this time, I was unable to control my thoughts and behavior. The second and more severe psychotic break led me to do things I never would have imagined I was capable of. I ended up in a jail cell, where my mind was more trapped than my body. After two weeks of delusion and disconnection from reality, my mental state became stable only to feel a lifetime of guilt, shame and sadness.

What I had done was in no way a reflection of who I am. As I was tossed in solitary confinement, the outside world received only a glimpse of what happened to me. They saw an incorrect portrayal by the local media, helping to create the stigma that still follows me today. “Man bites off large chunk of his dad’s earlobe” are some the first words you see when searching my name online. You might find some of the Facebook comments saying “he needs the ever living sh** beat out of him…” or “Mike Tyson want to be.” The lack of care about what I was going through is pretty evident.

I understand why people fear me. The words they see have no context to who I have been my whole life. Maybe if we treated mental illness the same way we do with physical illness, the community would be more sympathetic and caring. Maybe the news articles would have been different. Maybe I would have received ‘get well’ cards and visits from friends and family when I first went to the hospital.

Instead of jail, maybe I would have been taken to a place that wouldn’t shut the door on me and watch as I uncontrollably shook my body saying “the devil’s inside me.” Maybe, when I became healthy, my brother-in-law wouldn’t have stopped me from seeing my nephew without him around. Maybe a conversation with someone saying I was a “crazy lunatic” and should’ve stayed in jail would have been different. Maybe a classmate in my current graduate program wouldn’t have expressed their fear of me to another classmate. Maybe I wouldn’t be experiencing the distress of not knowing who has read those articles. Maybe, people would take an extra step to remember how each situation is different, try to understand them and realize judging or generalizing doesn’t give hope to those who suffer from mental illness. 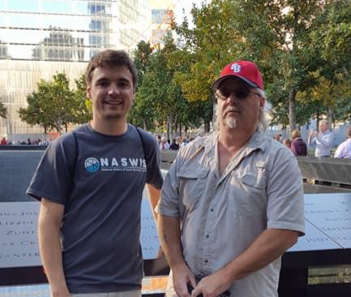 Despite all of this, today, I am attending graduate school, working towards a master’s in social work and striving to make social change. With proper treatment, I have been able to learn how to live with mental illness. There have been many people who’ve shown their support for me, and I am grateful for them. Especially my father, thank you for continuing to care for me. I love you, and I am sorry for what happened to you.

At first, I wanted the news outlets to remove or limit the ability to search those articles. But with an email to each of them, only one was removed. I pondered the battle of getting the others removed, but I’ve changed my mind. I’ve realized by hiding the stigma I experienced from those articles wouldn’t help prevent it for myself or others in the first place. Instead, I’m writing as a self-advocate, using my voice with a desire to help change the perception of mental illness.

Change begins with a community that offers support to any person suffering. Together, we can continue creating an empathetic and caring community. Illness doesn’t stop me. Be empathetic. Give support. See the change.

Cohen has a bachelor’s degree in Sociology and Communication. He grew up in Cohocton, NY.