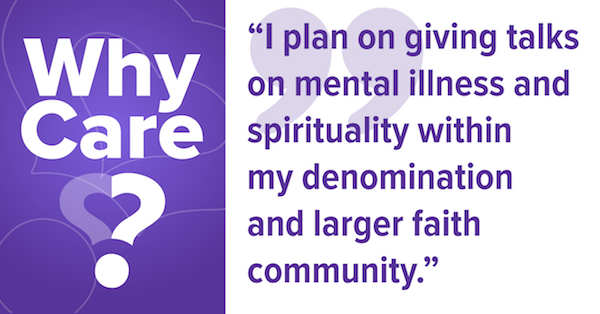 I have been a church girl all my life, and the traditions and cultural importance of the African American church community shape who I am.

In my community, there is a stark contrast between physical illness and mental illness. I would often hear about people with diabetes and high blood pressure as these diseases are prominent in African Americans. Ironically, no one in church said this is caused by bad eating habits or lack of exercise. Instead, they would offer prayers to God to heal the person of high blood pressure.

Mental illness, however, was seen as the result of having demons, bad spirits or curses. I never heard of cancer being the result of demons or bad spirits. The person with mental illness was sometimes stigmatized as having a personality problem, which was also a private family matter.

When I was 15, I had a fear of crowds resulting in meltdowns. I believed that there were certain people at school that were given, by God, inherent superiority, and that I was inferior compared to them. I would try to explain the solar system and UFO’s to my mother and spend countless hours drawing these elaborate diagrams explaining how I felt.

My parents took me to a private inpatient hospital for diagnosis and testing in 1991. I was lucky that my family sent me to a private inpatient hospital, which was perceived very differently than going to the state hospital. There was no “shame” with private doctors as opposed to the shame of telling church members that they had to send their 15-year-old child to the state mental hospital.

At the time, depression was rampant in my bipolar disorder, and I was prescribed Wellbutrin. Medication was my only form of treatment for a long time. I did not realize until age 38 the importance of seeing a therapist. For African Americans in my area, there was no knowledge of psychiatrists or therapists. When I was diagnosed, my family had never even heard of bipolar disorder.

Learning To Accept My Condition

In my twenties, I was extremely impulsive and putting myself into dangerous situations. I didn’t know it was a result of mania. I was too ashamed to go back to a psychiatric hospital. Also, I didn’t think I needed to. I just thought I did not pray enough or that I was not close enough to God. I thought that if I did all the “right” religious things, such as going to church, reading my bible more, or praying more, my bipolar symptoms would go away.

So, I consulted a spiritual guru. She told me that if stayed in a higher consciousness and followed certain rituals that I would not need my medicine. So I stopped taking it, and I nearly went into psychosis.

My experiences are the reason why I plan on giving talks on mental illness and spirituality within my denomination and the larger faith community. No one should be urged to stop taking their medicine because they performed certain rituals or because the elders have prayed for them.
Accepting my bipolar as an illness is a constant journey. I am not sure when I “came out,” but I have become more comfortable with educating others about bipolar disorder. I now realize that I am not bipolar, but rather, I have bipolar disorder.

Sparking Change In My Community

Recently, there has been a lot of progress in my church towards reducing the stigma on mental illness. For example, when my medication had not taken its full effect, I was in a state of pain and desperation, my church prayed for me during the service. The positive support of church elders praying for me made me feel loved rather than ashamed.

One Thanksgiving, the church collected donations to support a local counseling center. Our pastor has noted that he can offer counseling, however, if the person needs additional help beyond his scope of practice he would refer them to that counseling center. Additionally, suicide deaths are starting to be seen as a result of mental illness, not a result of succumbing to demons.

Finding Hope Through My Faith

My current therapist has a doctorate in divinity, which helps me have a holistic approach to the challenges of dealing with bipolar disorder. I can be honest with him because there is no shaming. He helps me work through boundaries and access resources before and during a manic episode. I believe medication, therapy and spirituality are holistic resources that work together as an integrated system of treatment.

For me, prayer promotes a source of hope. I repeat mantras that I use in stressful times. My favorite one is, “Fear not, the Lord provides.” Over time, my faith has become a source of strength in dealing with my bipolar disorder.

Ivory Smith Causey has a B.A. in sociology with a minor in women and gender studies from Georgia Southern University. She has a B.S. in nursing from Macon State College and is medical surgical certified. Ivory is a registered nurse at Atrium-Navicent Health in Macon, Georgia and works in an inpatient dialysis unit. She is a member of the American Holistic Nurses Association and hopes to be certified in holistic nursing.

Realizing The Impact Of Mental Illness On My Family