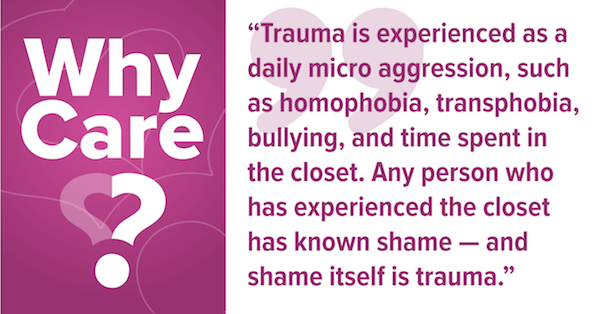 I’ve been living in Los Angeles and working in West Hollywood, LA’s gay neighborhood, for 10 years. In that time, I’ve unfortunately known far too many people who have overdosed from drugs or alcohol or who have died by suicide.

Recently, I was told a young man I once worked with at a bar had killed himself. From the outside, he appeared to have it all: He was handsome, charming, in good shape and commanded attention wherever he went. Even in the sharing of his death, everyone I spoke to said, “He was so handsome.”

Similarly to the others I’ve known who have died or taken their own lives, he embodied what, for most people (especially living in West Hollywood) would consider as ideal: external beauty and strength. But each of us has an inner world, which is so much more than what appears on the outside.

I can’t say what compelled this young man to take his own life and we cannot know what it’s like to walk in another person’s shoes. But what I do know is self-acceptance and a sense of belonging is what saved my own life since coming out of the closet—experiences you won’t get from external beauty or strength. And if a person is seeking fulfillment through substances or being “seen” externally rather than seeking fulfillment for who they are on the inside, the results can be devastating.

The Importance Of Self-Acceptance

Author Brené Brown wrote in her book, “Daring Greatly,” “Because true belonging only happens when we present our authentic, imperfect selves to the world, our sense of belonging can never be greater than our level of self-acceptance.”

This applies to everyone, but being young and part of a culture that validates strength and beauty from the outside in, the concept is harder to achieve. It’s one thing to look around and see people through the lens of what they show us from the outside, but another to fully accept and embrace someone wholeheartedly and unconditionally for who they are on the inside. I think this is what many people in the community are missing, especially those who are already struggling to accept themselves for who they are.

Sadly, most of the people I know who have died while living in LA have either worked at a gay bar in West Hollywood or have been a part of the community.

The Connection Between The LGBTQ Community And Trauma

A few years ago, I attended a conference for mental health professionals and the keynote presentation was about LGBTQ youth and trauma. During the talk, the connection between trauma, addiction and the LGBTQ community suddenly became clear to me. I had always looked at increased rates of drug and alcohol abuse among people who are LGBTQ through the lens of shame, but in order for us to get a complete picture, we have to be able to see the effects of trauma.

Most of us think of trauma as a rape, murder, death, war or a catastrophic event or natural disaster. And while these are unequivocally traumas, people also experience trauma as daily microaggressions, such as homophobia, transphobia, bullying and time spent in the closet. Any person who has experienced the closet has known shame—and shame itself is trauma.

This also includes the trauma caused by the church toward the LGBTQ community. For years, certain religions have failed to accept gay, lesbian, bisexual and transgender people. And for that reason, the LGBTQ community has had to create alternative spaces to gather, connect, celebrate, and essentially, worship.

Making amends where there’s been harm is part of the healing process. The more we can recognize, repent, and repair, the more we can prevent future generations from experiencing not only shame, but trauma. And the more we can make space for a young person to cultivate a meaningful spiritual connection and teach them an inner sense of self-acceptance from an early age—which includes feeling welcome, celebrated, and affirmed—the more we will be able to repair.

According to Native American tradition, when we heal, we heal seven generations before us and seven generations after. Doing the work to repair, now, both individually and collectively, will not only heal our past, but it will help heal the future.

In honor of all lives affected by addiction, mental illness and suicide.

Chris Tompkins is a spiritual life coach, teacher, and TEDx speaker based in Los Angeles, California. Chris teaches interpersonal development, self-empowerment, and confidence building throughout Southern California at high schools, after-school programs, LGBT centers, and LA’s Central Juvenile Hall. Catch up with Chris on his website or find him on Twitter and Instagram.

Tracking Symptoms of Mental Illness? There’s an App for That

You & NAMI-DAC Can Make a Difference