Personal Story: All Things Can Be Good

Personal Story: All Things Can Be Good 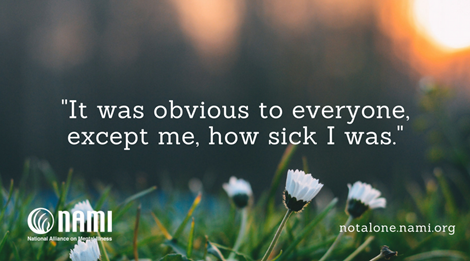 The voices in my head were real and kept getting louder. They were the sounds of many aliens all talking at once. Though I could not understand the words, I understood the harsh ridiculing tone in which these outer space beings spoke.

The voices continued to taunt louder. Fear began to take control. Instinctively, I knew that panic would only make matters worse. The voices were totally separate from my thoughts. I wondered, have I gone crazy? No, I could still think logically. I knew that I was having a hallucination. Will my mind ever come back? That I didn’t know.

Streams of hot tears rolled down my cheeks. When I listened to the sounds, they became much louder. They became softer when I tried to concentrate on something else. What could I concentrate on? Thinking was difficult. I whispered the name Jesus over and over. Saying His name brought peace. I tried only to hear His name, but the voices continued to lash out although they were somewhat quieter.

Finally, they were gone. What seemed like an eternity was probably just an hour. I was exhausted from a day of tension and hours of crying. Sleep came quickly after my fight against being conquered by hallucinations.

This was my first experience with mental illness and would be just the beginning of several years of mental and emotional torment. My daughter, Virginia was in sixth grade when the illness hit me. I was a single mom and had no one to help us. I moved us to another town to get away from the fears that were seizing my whole being only to find that it got worse—poverty, losing job after job, eating out of garbage cans and selling my blood plasma to buy food for Virginia was the nightmare that we lived in.

At the beginning of Christmas break during Virginia’s eighth grade year, she came home from school and announced, “I can’t stand living like this any longer! I’ve called Grandmama and Granddaddy. They are coming to get me tonight.” The reality shocked me into knowing that I couldn’t take care of my daughter, so I helped her pack. In May I moved in with my parents also.

It was obvious to everyone, except me, how sick I was. Finally, Mama came home from work one day and announced, “I’ve made you an appointment on Wednesday with a Christian counselor. Here are the directions. You have to go.”

I was horrified. Mama thought I was crazy. I cried, but the appointment was made. I felt as though I had no choice, I had to go. On Wednesday, at 11:00, I went to see Josh, the counselor.

He knew I was angry. He told me about himself and asked questions. He listened without judging. Finally, I told Josh about the sounds I kept hearing. He called them voices. Josh said, “You need to make an appointment with a psychiatrist. You need medication. It will help.”

“But it’s not me,” I argued. “If everyone will just leave me alone I’ll be fine,” I cried and begged him to not send me to a psychiatrist.

“If I were in a concentration camp being beaten each day, would you say that medicine would help?” I questioned.

Again, I felt that I had no choice. I stopped at a pay phone on the way home and got my appointment.

A few days later, I was sitting in the lobby of the psychiatric center. “Rebecca Davis,” the woman called. I went with her to a tiny room. Once again, I told about the sounds. She called them voices. An appointment was made with the psychiatrist.

Dr. Smith listened and then said, “You have schizophrenia. If you don’t take your medication regularly, you could have a complete break and end up in an institution for the rest of your life. You will always have to take this medication.”

“You don’t need compassion,” he replied. “You need the truth.”

I stomped out of his office with my prescription. “I’ll prove that I don’t have schizophrenia,” I told myself. “I’ll take this medicine and it won’t work.” But to my surprise the medication did work.

I ordered and read some free pamphlets on schizophrenia and other mental illnesses. Schizophrenia was just a chemical imbalance. That’s why the medication helped.

Medicine, good doctors, counseling, a supportive church, and going to a rehabilitation center helped me to begin a ministry which includes: tutoring and mentoring children, speaking, writing books, and helping others who have a mental illness. The mental illness wasn’t the end but just the beginning of a more productive life.