Personal Story: From My First Episode To My First Child

Personal Story: From My First Episode To My First Child

My name is Chris Crutchley. I’m 37 years old and I was diagnosed with Bipolar Disorder as a 20-year-old college junior. I’ve never publicly told my story. In college I feared my peers would view me as a freak. As a professional I worry disclosure can cost me opportunities. This is why I’m speaking out. I want to be part of the solution that ends the stigma. 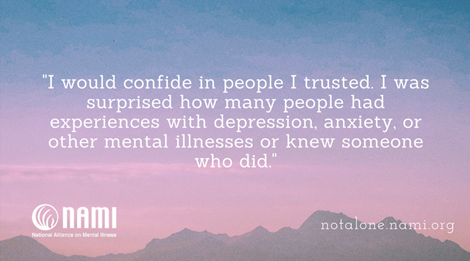 My first child was born this week. Honestly, I thought that would have happened in my late twenties. There was also a time I didn’t think fatherhood would happen at all. I hope my story can help those who suffer from mental illness and enlighten others to the challenges we face receiving adequate care.

In college I was a two-sport athlete on academic scholarship. I had my insecurities but was confident I would succeed in life. I had no history of mental illness and did not understand anxiety as I do today. I’ve replayed the events that lead to my 2001 hospitalization over and over in my mind throughout the years. I spent that summer training for the upcoming season. I wasn’t drinking or doing drugs. I didn’t feel any emotional distress. For whatever reason I stopped sleeping at night.

It was a gradual decline into psychosis over a matter of days. There were moments of clarity followed by delusion. I now can tell you my hallucinations were extensions of normal thoughts I had prior to suffering sleep deprivation. At times I tried to warn my family something was wrong. At other times I would convince them I was fine. They brought me to a hospital within a week of my First Episode Psychosis.

I read an article on FEP or First Episode Psychosis which is what I experienced in 2001. The article talks about the chances for the individual to have a successful future largely depends on how quickly the patient gets care after the first psychotic episode. It shocks me that the average time for a US citizen to get care after their first episode is 74 weeks (that could be due to a number of factors I guess). In Europe it’s 2 to 7 weeks. I am extremely fortunate to have family members who were responsive to my medical needs and sought care immediately when I couldn’t do it myself. Not everyone is that fortunate.

When I returned to school for my junior year I left both athletic teams I competed on to focus on my health. I was turning 21 and I had strict orders to stay away from alcohol and keep a 10pm bedtime. I was on very strong medication that made it difficult to follow conversation and “feel” typical emotions. I felt like a hollow shell of my former self.

I made the decision to own my story. I would confide in people I trusted. I was surprised how many people had experiences with depression, anxiety, or other mental illnesses or knew someone who did. I read books on mental illness and emotional intelligence so I could recognize my symptoms while they were happening.

I made it through college and graduate school but was unprepared emotionally to make the transition to functioning adult. In my mid-twenties and early thirties, I suffered a handful of setbacks that landed me in the hospital. After graduation my insurance lapsed and I stopped taking my medication or seeing a psychiatrist due to the expense. I know realize that medication compliance is critical to proper care. Not everyone has the ability to pay for the prescriptions written for them.

There was a time when I cut myself because I had been sent home from an emergency room after stating I am bipolar with suicidal thoughts. I returned to the same emergency room with a cut on my wrist and was admitted. That was my last hospitalization and I’m not proud of that moment in my life. I just want to illustrate how desperate a mental illness can leave you and how difficult it can be to get care.

I was 30 and given a month leave from work. I decided to make it count. I made a list of all my insecurities. I worked on everyone until I felt comfortable. On my list I questioned if I should be a father someday. Now I look at my 4-day old daughter and feel completely blessed. I want to help others who believe having a mental illness means they won’t have a productive career and shouldn’t start a family of their own.